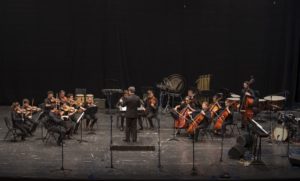 Orchestra of Russian Folk Instruments of the Educational Institution was established in 1974. In 1995, the team was awarded the title «People». In 2017, for the contribution to the development of national culture, the team was awarded the title “Honored Amateur Team of the Republic of Belarus”. Pupils and teachers take part in the orchestral team. The orchestra consists of the following groups of instruments: balalaika, domra, dulcimer, flute, button bayan accordion, gusli, percussion instruments. The repertoire includes works by Belarusian, Russian, foreign composers, arrangements of folk songs and dances. The orchestra is a laureate of republican, international (France, Belgium, Spain, Italy, Macedonia, Hungary, Ukraine) competitions and festivals.

The Kfar-Saba youth symphonic band was established in 1988 by Dr. Samuel Franko, as a main part of the Kfar-Saba city’s cultural landscape. The band includes today as many as 70 young wind and percussion players. Since its establishment, the band has been performing in various concert halls throughout the country as well as abroad (concert tours have been conducted in USA, Canada, Thailand, Germany, The Netherlands, Italy, Hungary, Austria and Portugal). It has participated in international festivals, opening concert of the «Maccabiah» games, national band conventions, national television programs, CD recordings, etc. The orchestra is the winner of international competitions and a regular participant of various festivals.